In a new study, a national team of researchers, including a University of Minnesota Twin Cities professor, have discovered an innovative way to improve catalytic processes used in the production of chemicals.

The discovery brings a new fundamental understanding of the catalytic chemistry that occurs in chemical oxidation and reduction processes and provides a steppingstone to practical applications that could make large-scale industrial processes faster, more efficient, and environmentally friendly.

The new study is published in Science, a premier peer-reviewed scientific journal published by the American Association for the Advancement of Science (AAAS). Senior researchers include Matthew Neurock from the University of Minnesota Twin Cities, David W. Flaherty from the University of Illinois Urbana-Champaign, and Ayman M. Karim from Virginia Tech.

The researchers show that the solvents typically used in industrial processes can react on the surface of supported metal catalysts to form organic surface complexes that act as mediators to co-catalyze particular chemical transformations.

More specifically, the researchers examined the catalytic reduction of oxygen to form hydrogen peroxide, a valuable chemical intermediate used in a variety of industrial processes including removing harmful chemicals in wastewater treatment facilities, bleaching wood pulp in the pulp and paper industries, detoxifying cyanide tailings in mining, and bleaching cotton fibers and wool in textile manufacturing. Hydrogen peroxide is produced commercially via a large-scale two-step process.

Significant efforts over the past decade have focused on the development of catalysts that can carry out this reaction directly, which would enable the development of cheap portable water remediation processes for remote locations across the world. Many of the efforts to create viable single-step catalytic processes for the synthesis of hydrogen peroxide as well as other valuable chemicals have focused on the development of the catalyst as well as the solvent that is used in an effort to maximize production rates. In the past, many of these solvents have been toxic or difficult to safely dispose.

In hydrogen peroxide synthesis, alcohol solvents have shown the highest reported yields. While water also works, it is not nearly as efficient as the alcohol solvents. The reason for the difference was thought to be the result of the limited solubility of hydrogen and oxygen in water. However, multiple irregularities in experimental data led the team to realize that the alcohol may be more directly involved than previously thought in driving the catalytic transformations that occur.

The team carried out a detailed series of experiments with supported palladium nanoparticles in water, methanol, and mixtures of water and methanol along with theoretical simulations to help explain the unique catalytic behavior in these systems.

The researchers observed spontaneous decomposition of solvent molecules to form organic complexes on the surface of the nanoparticles that act as surface mediators to catalyze the reduction of oxygen. This also prevents the subsequent reactions that lead to water, thus improving the yields to peroxide.

The team combined rigorous kinetic studies, high level quantum chemical simulations, spectroscopy, and atomic-scale characterization to follow the dynamic changes in the surface structure at the catalyst-solvent interface. They studied the reaction pathways and intermediates that dictate the selective reduction of oxygen to hydrogen peroxide.

The researchers showed that the formation of these redox mediators in the alcohol solvents catalyze the transfer of protons as well as electrons to drive the reaction. While water aids in the transfer protons, it does not facilitate electron transfer steps. The study reports that the surface-bound mediators that form in alcohol solvent systems work cooperatively with the metal catalyst to facilitate the coupled proton and electron transfer.

“We show that the alcohol solvents as well as organic additives can react to form metal-bound surface mediators that act much in the same way that biological co-factors such as Nicotinamide adenine dinucleotide (NAD) redox species do in catalyzing the metabolism, glycolysis and other oxidation and reduction reactions that take place in our bodies,” said Neurock, a chemical engineering and material science professor in the University of Minnesota’s College of Science and Engineering. 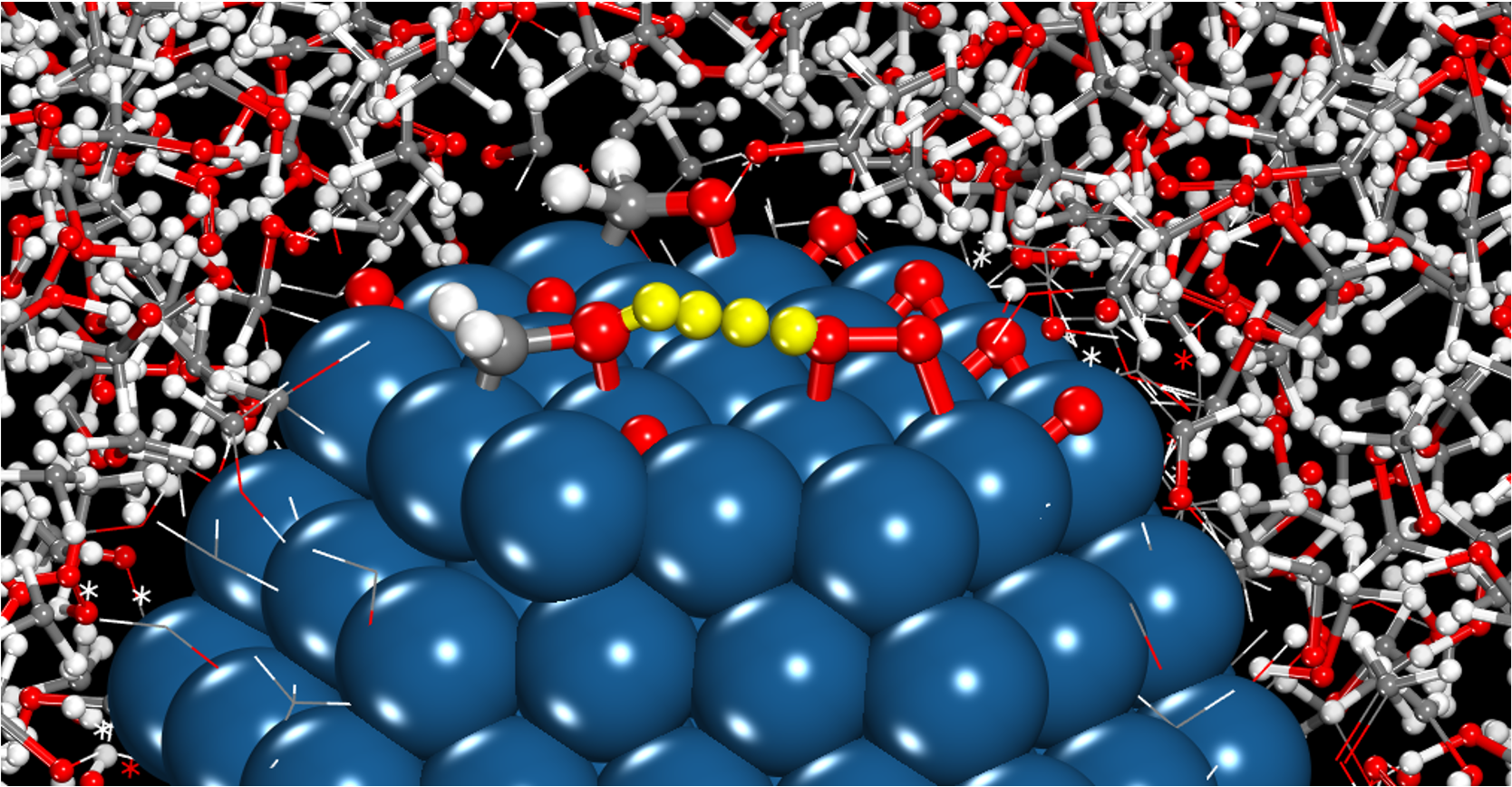 This illustration shows the structures of the hydroxymethyl mediator on the palladium nanoparticle in methanol solution reacting (transferring a proton and electron) with adsorbed oxygen molecule. Credit: Neurock Group, University of Minnesota

“What is new in the present work is that we show that these mediators form in situ on the catalyst surface where they can work in concert with the metal catalyst to facilitate these reactions,” Neurock said. “The understanding of how these mediators form and work together with the metal to catalyze redox reactions could have an impact on a wide variety of industries and, in particular, those involved in the synthesis of pharmaceuticals and chemicals and in the conversion of biomass to fuels and chemicals.”

This research was funded by the Energy and Biosciences Institute through the EBI-Shell program and the National Science Foundation with computational support from the Minnesota Supercomputing Institute.

Comet Catalina is helping explain more about our own origins as it becomes apparent that comets like Catalina could have been an essential source of carbon on planets like Earth and Mars during the early formation of the solar system.

American green treefrogs are able to pinpoint a mating call from a potential mate by inflating their lungs to reduce their eardrums’ sensitivity to other noise — including muffling other species’ mating calls — according to new research from the University of Minnesota.

The College of Veterinary Medicine has given a Labrador a second chance following a historic cardiac procedure.

Identifying a hurdle for some Alzheimer’s patients

A study finds that obtaining specialized geriatric care may be harder for rural and lower-income patients.

With grants from the Minnesota Medical Association, they’ll bring attention to the needs of deaf patients and disparities in medical school financing.

Innovating during a pandemic

These savvy alumni are building business models and products that can help their businesses—and their customers—thrive, even during a global pandemic.