How I spent the summer of COVID-19

For many University of Minnesota students, the move to distance learning in March was merely the first brush stroke COVID-19 would paint on their lives. As the pandemic showed no signs of abating, summer plans to study abroad or gain experience through internships were often postponed or scuttled.

Suddenly faced with open calendars, students had to look for other options. Here’s how three students found opportunity and insight in canceled plans. 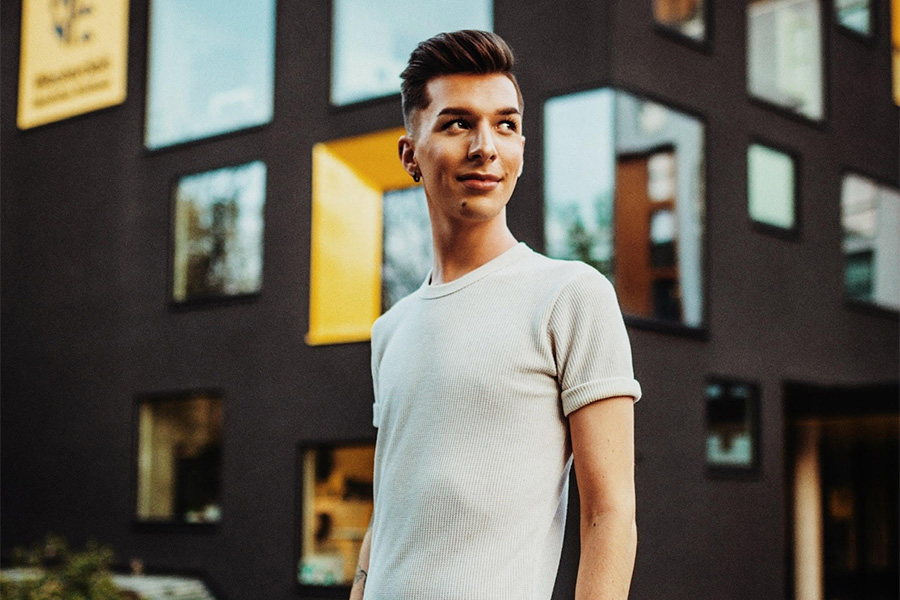 Scandinavian design is practically in Leif Kutschera’s DNA. His mother is 100 percent Norwegian, and as a kid, he made several trips to Scandinavia with his family.

In the spring of his junior year, Kutschera studied interior architecture at the Danish Institute for Study Abroad (DIS) in Copenhagen.

“I was totally immersed in Scandinavian design and felt that’s where my calling was,” he says.

He learned about DIS’s coveted paid internships, and when he returned to Minnesota, he spent hours working on his application.

“The school pulls students from all over, including a lot of Ivy League students, so I knew I had to put my best foot forward.”

Kutschera was accepted into the 15-month program and planned to leave for Denmark after graduation in May.

“I was going to pack up my things and get on a one-way flight,” he says. “I saw it as a stepping stone for a career in Scandinavia.”

But when the number of COVID-19 cases started climbing, all that changed.

“It was a gut drop when I got the email saying they were going to postpone internships for a year.”

When Minnesota’s stay-at-home order went into effect at the end of March, Kutschera’s life was upended in a different way. He relied on income from his part-time job at an interior design studio to pay rent and tuition.

“I was still employed, but there was no work,” he says. “I was stressed beyond comprehension trying to make ends meet.”

His studio instructor emailed her students about the U of M’s donor-funded Student Emergency Fund. Kutschera applied for and received a grant that allowed him to pay his bills and focus on finishing his thesis project.

“Had I not received the emergency fund grant, I would have been stretched very thin,” he says. “Instead, I was able to finish the semester with a good feeling about my time at the U of M.”

When everything paused last spring, it gave Kutschera time to think about the future and re-evaluate what he wants in life and in a career. He is staying in Minnesota for now, continuing his interior design job, and selling his watercolor paintings—a skill he honed while studying at DIS. He also decided to do the DIS internship next year.

“This doesn’t follow the trajectory students typically follow—to intern right after graduation,” he says. “But this could be a once-in-a-lifetime opportunity. Even if it’s one year later, it’s still a good fit for me.” 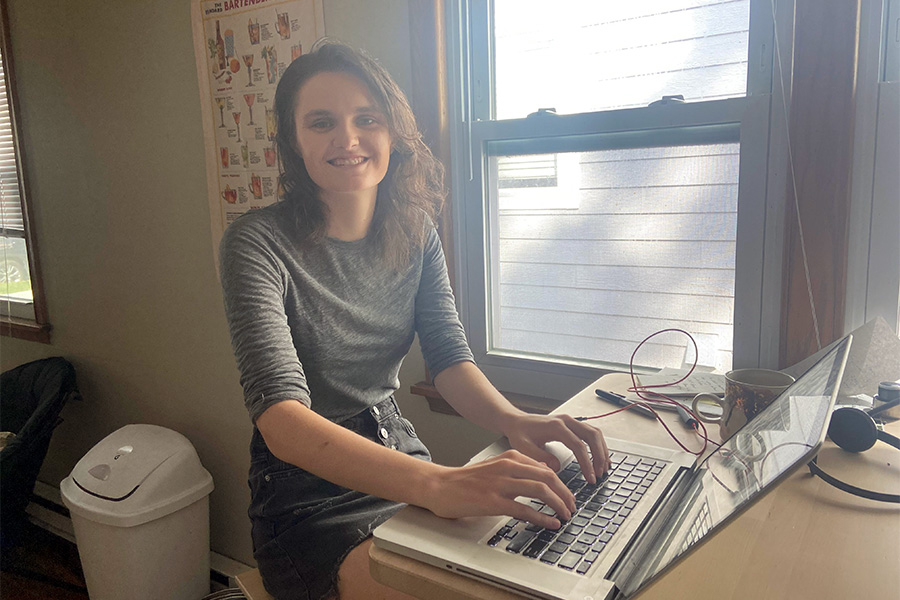 Madeline Deninger had her summer planned: She would spend 40 hours a week doing legal writing for Thomson Reuters in Eagan. That changed in May, when the senior majoring in strategic communications learned that her internship was canceled.

Deninger scoured internship and job postings looking for an alternative. An opportunity with El Independiente, an online news outlet in Madrid, caught her attention. She would be able to report and write for an audience 4,000 miles away without leaving Minneapolis.

No stranger to newsrooms, Deninger had been writing for the Minnesota Daily, the U of M student newspaper, since she was a freshman. She also interned in the spring of 2020 for the Minnesota Reformer, where she covered George Floyd’s killing and the aftermath. That experience helped get her an interview with El Independiente.

Working for the Spanish news site made her rethink her approach to reporting and storytelling.

“I had to learn to take a 30,000-foot view and not make assumptions about what people knew,” she says, adding that El Independiente translated her stories from English to Spanish. “What would make sense to me or someone here may not make sense to someone who isn’t familiar with Minneapolis as a city or the Black Lives Matter movement.”

She says learning about working in a newsroom in another country was one of the most valuable outcomes of her experience.

“I now have writing samples from an international news outlet. I wouldn’t have had that had COVID not changed my plans,” she says. “My experience shows that things can work out when circumstances change.” 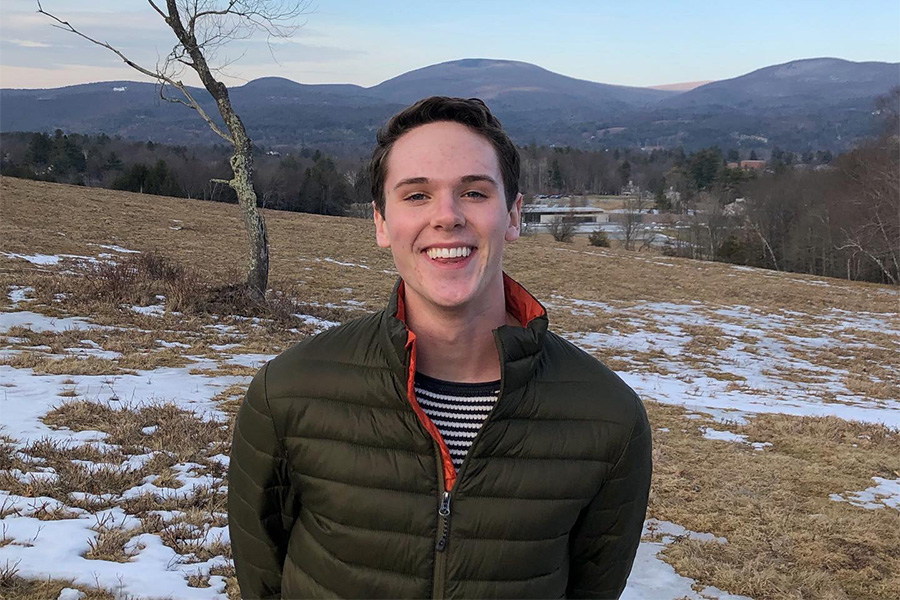 Evan Aanerud has built his life around the arts.

The University of Minnesota Morris senior grew up acting on stage. He’s since moved to administration, double majoring in theater arts and arts management.

Spending the spring semester studying at Massachusetts College of Liberal Arts and doing an internship at the Massachusetts Museum of Contemporary Art were critical steps on a path to one day managing a nonprofit regional theater company.

“I was in Massachusetts having the time of my life,” Aanerud says. Then COVID-19 happened.

In mid-March, he was on a plane coming home to Fergus Falls, MN, for spring break, when he got an email saying the museum was closing and his internship was canceled. His classes were moving online, too. He moved back to Minnesota and ended up finishing the semester from his childhood bedroom.

A few weeks later, he learned that his summer internship in New York City was canceled as well.

“It was going to be my big New York move,” he says.

As he was finishing his classwork, Aanerud couldn’t stop thinking about the future of the arts and the young artists he met who were struggling to pursue their passion even before the pandemic began.

So he connected with about a dozen friends and colleagues who together started the Emerging Artist Initiative to raise money for young artists who were having trouble paying for rent, utilities, and groceries.

“When I started looking at the relief fund market, young people who had emerging arts careers were often disqualified,” Aanerud says. “Many required that they be in a union, make a certain percentage of their income from their art, or have 5 to 10 years of work experience. Young artists don’t have that.”

Just weeks after it opened, the Emerging Artist Initiative had 1,700 applications for grants. They’ve been able to help 19 of those artists. Because Aanerud and many of his colleagues are students who are back in school, they plan to now concentrate on outreach such as mental health check-ins and education, and advocacy in the future.

This story was adapted from Legacy magazine, a publication of the U of M Foundation.

What started as a part-time teaching job blossomed into a series of remarkable roles for U of M student Sydney Redepenning.