“Next month we will release data showing that for a second consecutive year the University has competed for and won over a billion dollars in research, systemwide. With those results it is no surprise that our technology commercialization efforts continue to succeed,” said University President Joan Gabel. “Technology commercialization is not just about numbers, it is about seeding the American competitive economy with the research and tools that will power our economy, creating job growth and success for our citizens, both here in Minnesota and across the United States.”

President Gabel serves on the United States Council on Competitiveness as the Vice Chair for Higher Education and, in that role, promotes and reviews the impact of Higher Education research in driving the United States economy. MPact 2025 calls for 25 start up companies a year by 2025. In fiscal year 2022, the University launched 22 companies, well on track to meet the 25 company objective.

Frank Jaskulke, vice president of intelligence and head of Medical Alley Starts at Medical Alley Association, a Minnesota healthcare industry trade group, agreed with Gabel’s assessment. “The University of Minnesota’s licensing and startup activity are a difference maker in the growth of the Medical Alley ecosystem,” he said. “Our biotech, digital health and medtech clusters are growing larger and faster because of their work – especially with a record-setting 22 new ventures this year.” 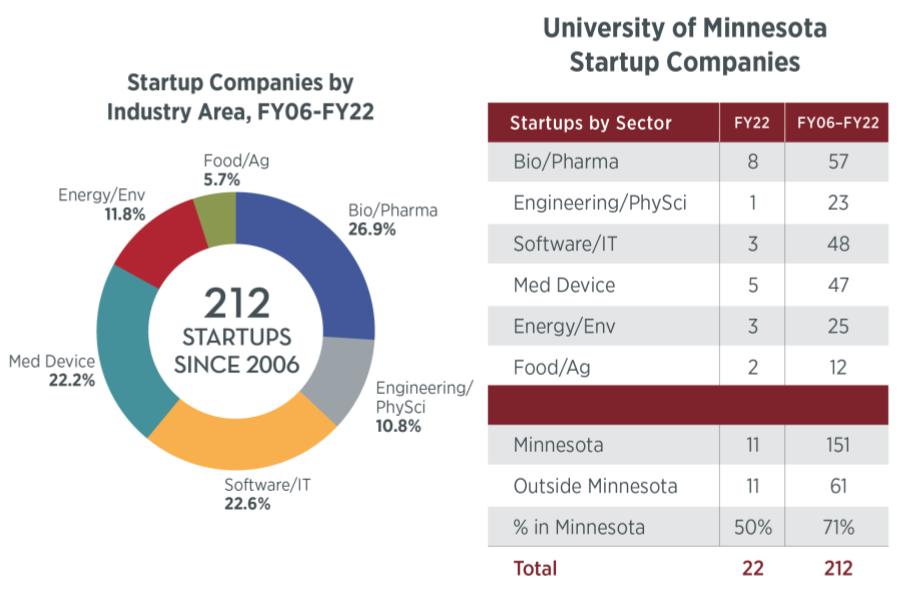 Data: Office of the Vice President for Research, University of Minnesota

“Our work helping to launch startups really shined this year, and we were proud to surpass a milestone of 200 startups spun out since the formation of our Venture Center in 2006 and end the year with a record number of startups based on inventions from our faculty and staff,” said Rick Huebsch, executive director of the University’s Technology Commercialization office. “We are spinning out more high quality companies at a higher rate, investing additional resources and working with potentially dozens of companies outside the University in partnership with the state’s Launch Minnesota program.”

New U of M startups in fiscal 2022 remained highly diversified across the sectors of the economy, as indicated in the table and chart above. The 212 companies spun out since 2006 have a survival rate of 77%, and 71% of companies have been located in Minnesota.

The Venture Center also released the results of its regular survey of U of M startups. Total investment in U of M startups is nearing $2 billion, up substantially ($650 million) since 2019, a remarkable growth rate given the challenges of the worldwide pandemic. The $1.8 billion invested reflects 210 companies and is composed of $1.1 billion in startup investment capital and $675 million from Initial Public Offerings and acquisitions. Ten University companies have been acquired or gone public since 2017.

The record level of patents issued seen in the table below is a result of quality patent applications from University inventors as well as patent offices worldwide catching up from a backlog created by the pandemic. According to Huebsch, the University is also including more foreign filings in its patent portfolios in order to tap into markets beyond the United States.

“We saw a drop in patent disclosures in fiscal years 2021 and 2022, which is the early step that faculty inventors take to protect potential new inventions, and that reflected the disruption of research at the University caused by the pandemic,” said Huebsch. “That said, we really ‘shook the trees’ these past two years to ensure that faculty and other researchers were still disclosing and then developing new innovations. It has been gratifying to see our research enterprise bounce back, and to see that U of M research creativity is again generating lots of new ideas.” 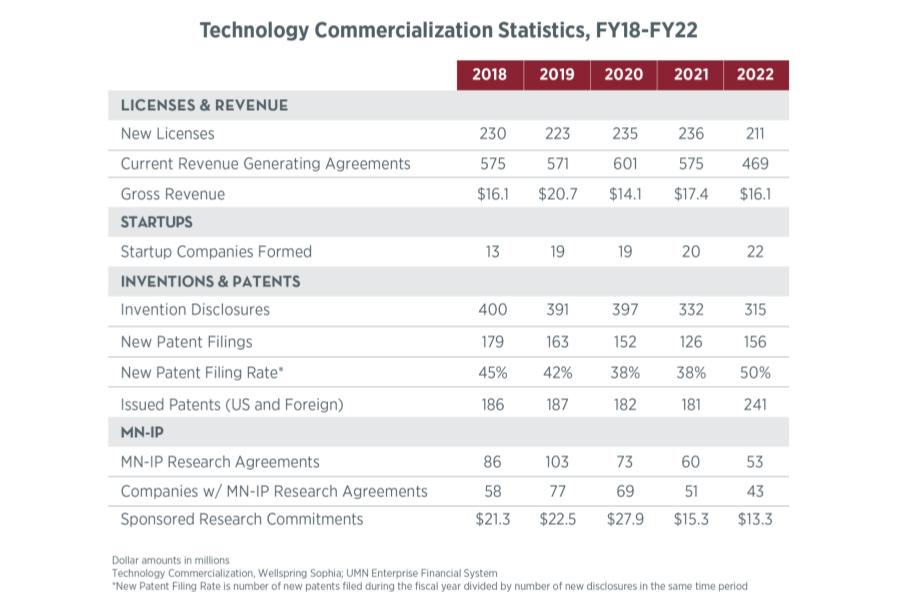 Data: Office of the Vice President for Research, University of Minnesota

The University also reported other standard technology commercialization metrics such as licensing, patent filings and revenues as reflected in the table above. New licenses and gross revenue declined slightly in 2022, a reflection of the weaker economy as the United States in particular wrestled with a slowing economy.

Annual technology transfer statistics reflect deal flow from year to year and are subject to significant volatility, so comparisons with other leading universities provide useful context for the University’s work:

“We’re blessed to have such a strong research university in Minnesota that understands technology commercialization so well,” said Steve Grove, Minnesota Commissioner of Employment and Economic Development. “The University of Minnesota is a key part of our state and regional startup ecosystem, and the direct partnership we have through Launch Minnesota helps us better leverage our state’s economic strengths.”