Her life had rolled along for 55 years without any health issues. But when confronted by a stubborn thickening of her midsection, Tori Jaffray went to an urgent care center. Her diagnosis: stage four ovarian cancer.

She sought help from doctor after doctor, but got nowhere until she found Melissa Geller.

“I looked at her CT scan, did an exam, and had her on my operating schedule within a week,” says Geller, a gynecologic oncologist at the Masonic Cancer Center, University of Minnesota.

Ovarian cancer ranks among the hardest to treat, thanks to its ability to evade detection until the later stages. No test for it exists, and its subtle symptoms may allow it to masquerade as a menopause-related condition. Fewer than 15 percent of patients like Jaffray survive for five years. While colleagues work on a screening test, Geller and her team push for more effective treatments. 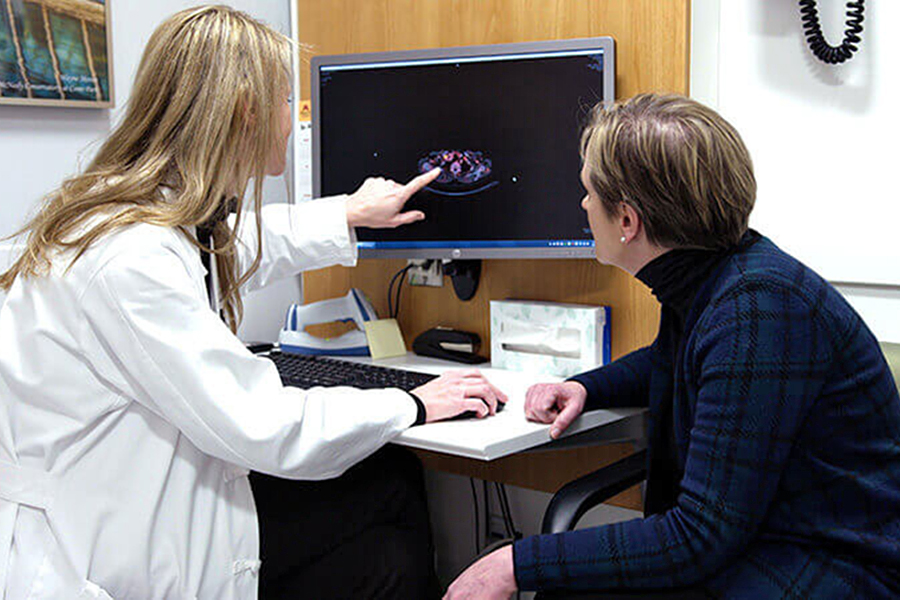 Geller enrolled Jaffray in a clinical trial based on a class of drugs called checkpoint inhibitors. These drugs interfere with interactions between immune cells and cancer cells in which the cancer cell blocks the immune cell from mounting an attack against it.

Jaffray’s scans and blood work look encouraging, and she says she feels fantastic. She’s been able to resume much of her active life in Orono, Minnesota—working, exercising, and taking long walks with her husband.

She knows the cancer could come back someday, but she also knows that Geller and her team have got her back.

Watch a video on Jaffray and Geller, read more.

Aaron Schilz has been appointed as the Executive Director for the Masonic Cancer Center, University of Minnesota.

The U of M’s Minnesota Dental Research Center for Biomaterials and Biomechanics (MDRCBB) has joined a national, collaborative research center focused on improving the development process for pharmaceutical products.

Bethany Hasz and Gable Steveson are the U of M's recipients of this year’s Big Ten Medal of Honor.

Nothing is stopping her now

From a one-room schoolhouse to a large public research university, Betty Sandison’s educational journey is one for the ages.

One student’s drive to save coral reefs