Published today in Frontiers in Ecology and the Environment, the study was led by Kira Cassidy, a research associate at Yellowstone National Park, and included co-authors at five national parks and University of Minnesota Voyageurs Wolf Project researchers Thomas Gable, Joseph Bump and Austin Homkes.

“For gray wolves, the biological unit is the pack or the family. We wanted to focus on the impacts of human-caused mortality to the pack, a finer-scale measure than population size or growth rate,” said Cassidy. “We found the odds a pack persists and reproduces drops with more human-caused mortalities.”

While many studies have looked at how humans impact wolf populations, this study took a different approach and examined how human-caused mortality affects individual wolf packs. To do this, Cassidy and her team contrasted what happened to wolf packs after at least one pack member was killed by human-causes with packs where no members died of human-causes.

Although the researchers did not examine whether human-caused mortality alters the size of wolf populations in national parks, this work shows that people are clearly altering certain aspects of wolf ecology in national parks even if they are not impacting overall population size. 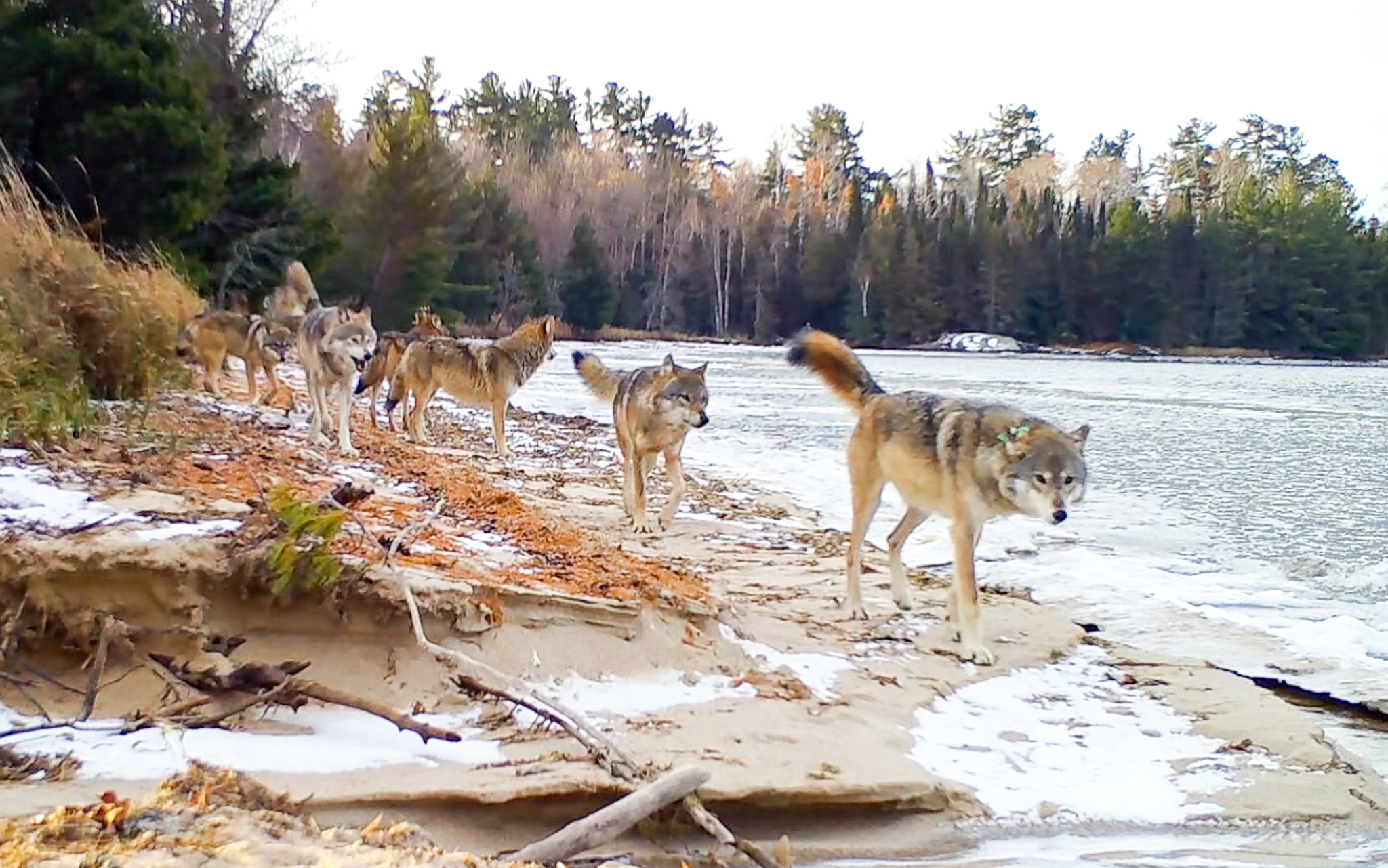 One reason for this is that humans are a disproportionate cause of mortality for wolves that live predominantly in national parks. In other words, wolves die more often of human-causes than would be expected for the amount of time wolves spend outside of park boundaries.

Of all national parks in the study, wolves in Voyageurs National Park spent the most time outside of park boundaries. In fact, wolves that had territories in or overlapping Voyageurs spent 46% of their time outside of the park. The result: 50% of all mortalities for these wolves came at the hands of people, with poaching being the most common cause of death.

“The unique shape of Voyageurs means that there are very few wolf packs that live entirely within the boundaries of the park. Instead, many wolf pack territories straddle the park border and when wolves leave the park, they are at an increased risk of being killed by people,” said Gable, a post-doctoral associate in the University of Minnesota’s College of Food, Agricultural and Natural Resource Sciences and project lead of the Voyageurs Wolf Project, which studies wolves in and around Voyageurs National Park.

However, Voyageurs was hardly unique as this pattern was similar across the other national parks in the study — Denali National Park and Preserve, Yellowstone National Park, Grand Teton National Park, and Yukon-Charley Rivers National Preserve — with human-caused mortality accounting for 36% of collared wolf mortality across all five parks.

These findings highlight why collaboration between different state and federal agencies is key when conserving and managing wildlife that go in and out of protected areas such as national parks.

“Wildlife populations that cross hard boundaries from federal to state ownership are a challenge to manage. Wolves don’t know the park boundary lines,” said Bump, an associate professor in the U of M’s College of Food, Agricultural and Natural Resource Sciences.

The Voyageurs Wolf Project is funded by the Minnesota Environment and Natural Resources Trust Fund as recommended by the Legislative-Citizen Commission on Minnesota Resources (LCCMR).

More stories in Agriculture and Environment

A world of experiential opportunities

Could above average snowfall provide drought relief in Minnesota?

Though some homeowners and commuters in Minnesota consider heavy snowfall an inconvenience, many are hoping this season’s above average snow totals will provide drought relief in many parts of the state, after difficult years in 2021 and 2022.