Realizing her dream | University of Minnesota Skip to main content

Hilariia Ponce has just one semester of college under her belt, and while she doesn’t have all the answers, she’s certainly not afraid to go looking for them. She credits her experiences in the National FFA Organization as key to her development, and her mother—for always being there.

Ponce is majoring in agricultural education with a minor in environmental science. Here, she talks about her path to college—a dream she didn’t think possible.

The first few weeks of college were definitely a rough transition. My family is really important to me, and so when I moved to the U, I didn't have those people to be with anymore.

And finding a group that is Afro Hispanic or that is Hispanic, you know, it's kind of hard to find that diversity because most of the students who do live on the campus (in St. Paul) are predominantly white. I'm not saying I can't associate with everyone—because trust me I can associate with anyone (laughs)—but it's always nice to have that little connection with people where it’s like, ‘Hey, I'm not alone.’ It's nice to see people who look like me, talk like me.

"...it's always nice to have that little connection with people where it’s like, ‘Hey, I'm not alone.’ It's nice to see people who look like me, talk like me."

On realizing her mother’s dream of her going to college

I grew up really poor. We struggled a lot. And I get a little emotional, but I remember going to softball and not having money to even buy a glove, or a uniform, so I would use other people's.

I never saw college as an opportunity. That's why I thought of the military first. I was like, ‘I'm going to go to the Air Force.’

[But then] I said, ‘You know what, I can do this. Like, if I want this done there's only one person who can do this and that's me.’

On pushing through challenges

I was crushed. I remember just sitting in bed thinking, ‘What did I do wrong? Can I not do college, is that the reason?’ [It was] like all these lightning bolts coming down on me.

I look at it as, ‘You know what, name another person who fills out 22 scholarship applications in one night.’ Because not many people can do it. I did that.

"I was one of the few minorities to show up in my chapter. But I looked at it as, ‘You know what, I'm here, I'm going to represent, I'm a smart gal—I’ll manage."

On joining the National FFA Organization and finding her voice

So FFA started in my high school my junior year. When I went to all these competitions, I was one of the few minorities to show up in my chapter. But I looked at it as, ‘You know what, I'm here, I'm going to represent, I'm a smart gal—I’ll manage.’

I think FFA has so much opportunity for students, especially minorities. It’s such a great pathway. It's not just focused on being a farmer or being a rancher—it's really built off of community and leadership and the development of your character. 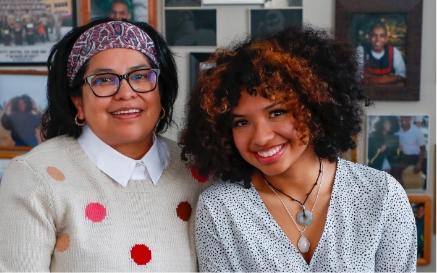 If it wasn't for my mom I don't think I would be in college. My mom is a single parent—she raised all six of us by herself. And she's incredible, and all my [four] brothers are incredible men. We all [including one sister] had a great person behind us and that was our mom. She tried her gosh darn hardest for everything I've ever had and everything I've ever wanted, so she's my backbone.

On the role of agriculture in her future

Agriculture was not my first choice. But when I joined FFA I saw it as a great opportunity. There's something that I see in agriculture that is the future. I see development. I see technology. And of course we have great leaders, but I think that if we bring in leaders who are more diverse, I feel like it could be a better, more welcoming career for a lot of people.

Explore Minorities in Agriculture, Natural Resources & Related Sciences at the U of M

Find scholarships at the U of M

Celebrate Black History Month with programs and events throughout February

Hilariia Ponce is a first-year undergraduate student majoring in agricultural education with a minor in environmental science. She is enrolled at the University of Minnesota College of Food, Agricultural and Natural Resource Sciences.

More stories in the series Where It Starts

Megan Finch reads James Baldwin “to think rather than to substitute thought.”

While cooking for 20-hour days to feed the thousands who gathered after George Floyd’s killing, Bryant Jones was struck by an idea that grew into a garden ... and a community.