The University of Minnesota successfully competed for $1.15 billion in external research funding in fiscal year 2021, a 31 percent jump that pushed it well past the $1 billion award mark for the first time in the University’s history. Other research and technology commercialization metrics also remained strong.

The record research awards total was fueled in part by $256 million in COVID-related projects. The data also showed the University maintained robust growth in many areas across the research enterprise and launched a record number of new startup companies based on researchers’ discoveries.

“During this time of global urgency, in which society depends more than ever on science for insight and guidance, our researchers have truly risen to the challenge,” said Michael Oakes, PhD, the University’s interim vice president for research. “Their success in attracting this level of funding demonstrates their commitment to addressing the many impacts of the pandemic and helping to ultimately bring it to an end. This level of dedication exists not just in medicine and public health, but throughout all disciplines as part of the fabric of a public, land-grant university.” 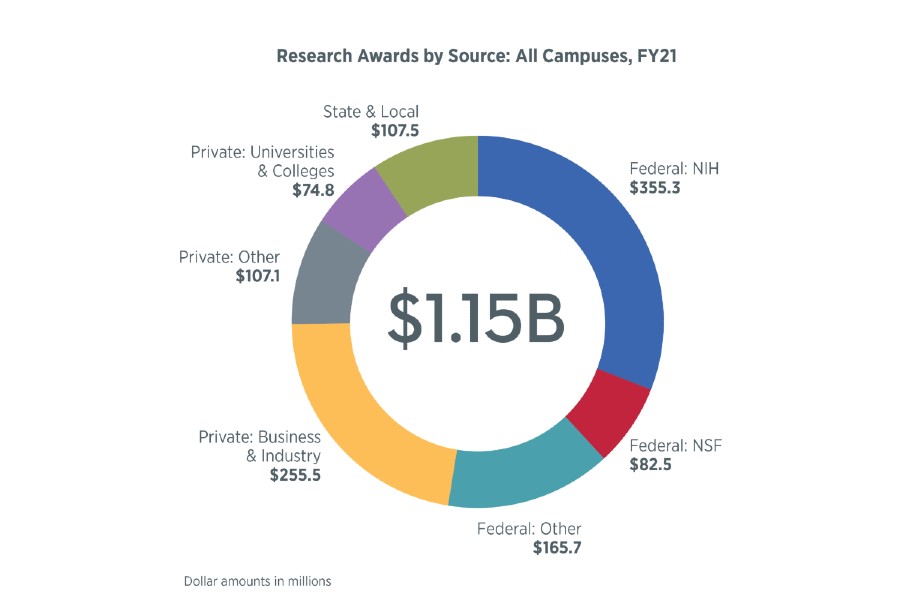 Overall research expenditures, a lagging indicator that represents actual annual research spending on external awards and institutional funding in a given year, rose slightly by 2.9 percent to $1.04 billion in fiscal 2020 for the Twin Cities campus. All five University campuses combined saw $1.07 billion in research expenditures, a 2.7 percent growth. (See Methodology section below.) 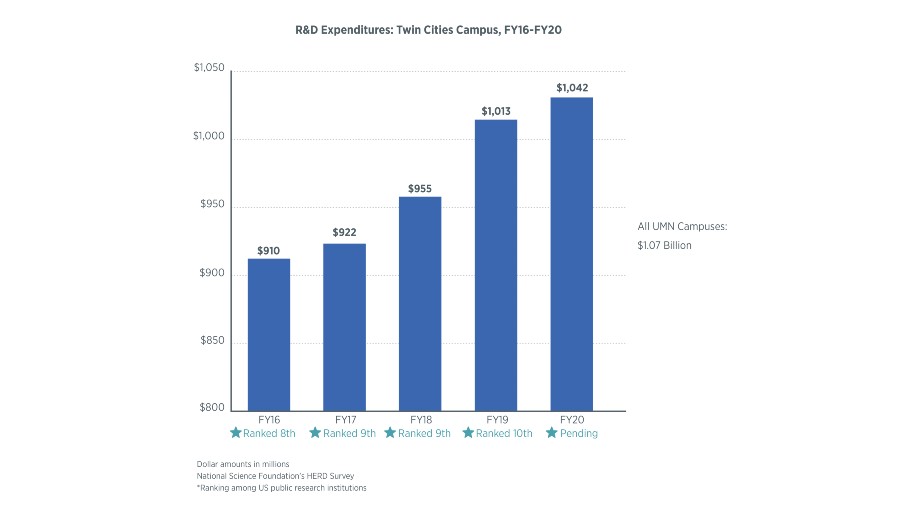 Research at the University advances knowledge across a wide range of fields, yielding new solutions and technologies that stand to benefit the health, well-being and environment of people in Minnesota and across the globe.

The University’s technology transfer activities also saw continued success in licensing relevant research to companies for the development of new products and services that benefit the public good, foster economic growth, and generate revenue to further support its mission. The University signed 236 new licensing deals (one more than last year) and ended the year with 575 current revenue-generating agreements.

Some of those new licenses were with startup companies. UMN Technology Commercialization’s Venture Center launched a record 20 startup companies, with 14 based in Minnesota. These startups include Exergi Predictive, which uses a data analytics system to improve the fuel and electric efficiency of hybrid electric trucks used in commercial applications. University President Joan Gabel noted at last Friday's Board of Regents meeting that the University is now “on track to reach our MPact 2025 goal of launching 25 startups per year by 2025,” referring to the University’s systemwide strategic plan.

In total, the Venture Center has launched more than 190 startups since 2006, bringing innovations to industries crucial to Minnesota, such as medical technology, life sciences, food and agriculture, and natural resources. These startups have a success rate of 75 percent, well above the national average, and have attracted more than $1.15 billion in investment, from 2006 to 2019. Nine of them have been acquired or gone public since 2017. 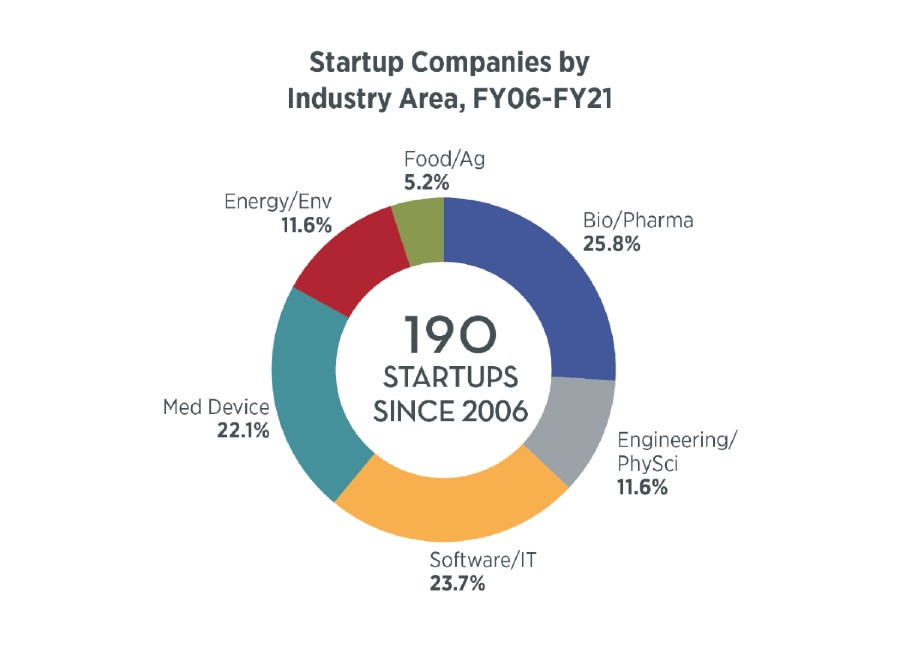 The University was issued 181 patents from US and foreign patent offices, and researchers set the foundation for future commercialization success by making 332 invention disclosures to UMN Technology Commercialization in fiscal 2021. 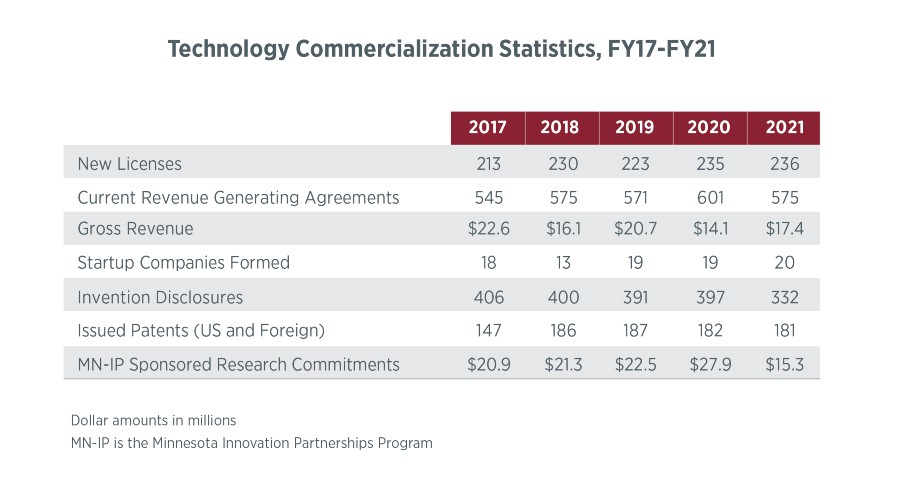 “By combining the expertise of industry leaders and academic researchers, we are able to pursue new and exciting research directions, while ensuring the discoveries that result have a path to the market, where they can benefit people in society,” said Rick Huebsch, executive director for UMN Technology Commercialization. “To help reach Pres. Gabel’s goals for increased corporate engagement, we are streamlining the experience for companies interested in engaging with the University, whether it be to sponsor research, license technology or tap researchers’ expertise.”

Individual stories of University technology transfer and corporate engagement are available at the Technology Commercialization website, including a multi-project collaboration with Cisco that came together quickly in early 2021.
Interim Vice President Oakes is scheduled to present a more detailed analysis of the University’s fiscal 2021 research and technology transfer work to the Board of Regents at its December meeting.

Award totals represent the sponsored funding researchers compete for and receive in a given year and can include amounts researchers expect to spend in future years. The University’s fiscal year 2021 spanned July 1, 2020 to June 30, 2021.

Research expenditure data, by contrast, represents research spending from both external research awards and internal funding. This figure, which lags by a year, is an accepted standard for comparing universities’ research activity. The National Science Foundation publishes an annual survey of US research institutions’ R&D expenditures; the fiscal 2020 edition is expected in November. The University of Minnesota ranked 10th among US public research universities in last year’s survey, which was based on fiscal 2019 statistics.

An incoming graduate student at the University of Minnesota’s Humphrey School of Public Affairs, Lindsey Erdmann, has been named a 2021 Tillman Scholar.

In its annual report to the University of Minnesota Board of Regents, Gopher Athletics detailed a year unlike any other in the department’s history.