In the Land of 10,000 Lakes, nothing resonates like the quest for clean waters. But given the nearly billion gallons of wastewater discharged in the state every day, keeping it clean for the folks downstream can get complicated.

Sometimes, what’s needed is an independent expert or two who can work with the operators of water treatment plants to design possible remedies.

That’s where MnTAP comes in. For the last 35 years, the Minnesota Technical Assistance Program—a center within the University of Minnesota's School of Public Health—has been providing University staff and student interns to help towns and businesses save money and improve their efficiency through water, energy, and waste reduction. And the best part? This service comes free of charge.

“We help them use energy more efficiently, become more competitive, and reduce the burden on the environment,” says MnTAP director Laura Babcock. “It’s always been about looking out for Minnesota residents and protecting public health by reducing chemical exposures.”

Nutrients: too much of a good thing 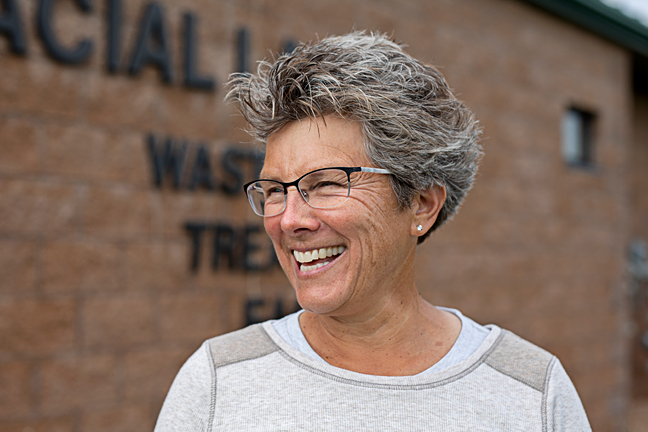 "I would absolutely recommend MnTAP to other municipalities. They were like a second set of eyes to help identify inefficiencies and make recommendations to improve those inefficiencies. What a wonderful resource to work with."Colleen Thompson, director, Glacial Lakes Sanitary Sewer and Water District, Spicer, Minnesota

Waterways can suffer from blooms of bacteria or algae when levels of nutrients, especially phosphorus and nitrogen, get too high. Minnesota sets standards for these nutrients—from people, discarded food, industrial discharges, etc.—in the outflow from wastewater treatment plants to ensure the health of downstream surface waters used for fishing, boating, and drinking.

There, a MnTAP team stepped up to help the Glacial Lakes Sanitary Sewer & Water District (GLSSWD) remove more nutrients from the plant, which is owned and operated by the county and serves the cities of Spicer, New London, and Kandiyohi, as well as Green Lake, Nest Lake, George Lake, Henderson Lake, Diamond Lake, and Lake Florida. The treated water flows into the Crow River and on into the Mississippi.

Key to the plant’s operations are basins in which bacteria remove either phosphorus or nitrogen from the water. In one basin, bacteria convert nitrogen in the wastewater into a form called nitrate. The nitrate-laden water then flows into a tank—the “nitrogen tank”—where the nitrate is converted to harmless nitrogen gas and released to the air.

From hard work, a solution emerges

Working with Nathan Reed, the plant’s lead operator, Jon Vanyo from MnTAP and U of M Twin Cities senior environmental engineering student Josh Kirk analyzed and modeled every aspect of the operation to find a way to reduce the “nutrient load” of the plant’s outflow.

They noted that the nitrate-laden water dropped about a foot as it fell from a pipe to the water surface in the nitrogen tank.

“We presume that that drop [introduced] air into the tank,” Kirk says.

Thief River Falls—Arctic Cat saved 2,500,000 gal. of water by reuse in a rinse process, discharged 150 lbs. less phosphorus by switching process chemistries, and saved $12,000.
Park Rapids—Lamb Weston/RDO Foods saved 5 million gal. of water and the energy to heat it, avoided use of 5,000 lbs. of hazardous material, and saved $32,000.
Rockford—Ver-tech Labs avoided $100,000 in treatment costs by reducing discharges of phosphorus and suspended solids.
Metro area—Cemstone Products Co. saved 5.8 million gal. of water and $6,000 by reusing process water at plants in the Twin Cities and several other cities in or near the metro area.
Rochester—Kerry, Inc. eliminated 124,000 lbs. of hazardous material use and saved $58,000 by optimizing process control.

If air was getting into the nitrogen tank, so was oxygen, which interferes with the conversion of nitrate to nitrogen gas. That sort of inefficiency also leads to higher costs and energy use.

"MnTAP continues to provide multiple wins for Minnesota: millions of gallons of water saved annually, thousands of dollars in operational cost reductions for businesses, and, importantly, real-world training for the engineers and scientists who will lead these eﬀorts through the twenty-ﬁrst century."Brian Davis, senior engineer, Metropolitan Council Environmental Services

The remedy? “We recommended submerging the pipe to cut out the mixing with air,” Kirk says.

“Their calculations indicate that redoing the connection will make a difference,” says Colleen Thompson, director of GLSSWD. “It’s on our to-do list.”

“I hope that the benefits will be realized and measurable in 2020,” says Kirk. “The result will have a positive impact on people of my home state, and also on people who live on the Gulf of Mexico”—a reference to the Gulf’s coastal “dead zone,” which has been linked to an oversupply of nutrients.

“This project allowed me to apply theoretical knowledge and realize practical applications that improve our environment. We have to be good stewards and clean up after ourselves.”

Do you know what the U of M does for you?

From hops to glass

U of M researcher Charlie Rohwer is partnering with Minnesota hops producers to breed new varieties of hops for the state’s climate and its brewers.

U of M researchers pursue biosecurity innovation, so Minnesota’s poultry industry can continue its success story.