Dinosaurs were, most likely, warm-blooded and more active than modern reptiles. For a lifestyle like that, they would have needed a robust breathing system.

Since dinosaurs gave rise to birds, it’s been thought that all three major lines of dinosaurs breathed more or less like birds, which have air sacs that pump oxygen into stationary lungs. Much of that work was based on studies of species from the lines more closely related to birds, such as  theropods like T. rex and sauropods like Brontosaurus.

The third line, the ornithischians—which gave rise to Triceratops, Stegosaurus, and duck-billed dinosaurs—have received little attention. With few fossils to go on, their early evolution has been a mystery, and even referred to as “ghost evolution.” 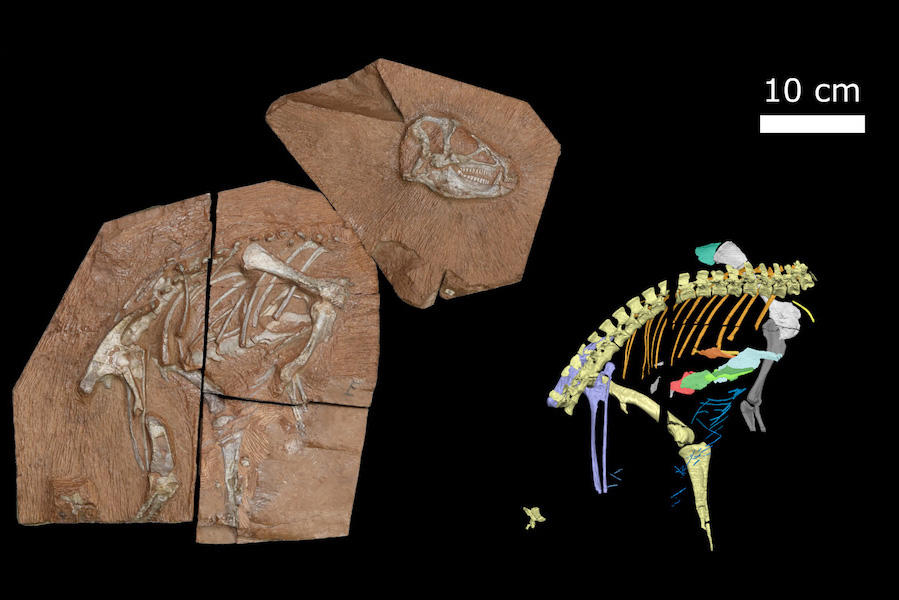 But now, a study led by College of Science and Engineering PhD student Viktor Radermacher has found a novel, decidedly un-birdlike breathing system in the most primitive ornithischian: Heterodontosaurus tucki, an early Jurassic dinosaur.

Examining a well-preserved skeleton of the turkey-sized dinosaur from South Africa, he and his colleagues found strong signs that it breathed with expansions of both chest and abdomen. Key was a hint that a muscle, anchored on a pelvic bone, tugged on the lungs to expand them—similar to the way crocodiles breathe.

In the researchers’ words: “We propose that … H. tucki is a transitional animal preserving the early steps in the evolution of a unique ventilation mechanism in ornithischian dinosaurs. We name this model the ‘pelvic bellows.’”

But while H. tucki had this feature, its famous descendants didn’t.

Thus, “Heterodontosaurus is a missing link between the ancestors of dinosaurs and the bigger, charismatic species we know,” says Radermacher, who studies in the Department of Earth and Environmental Sciences. “This … fills in some glaring gaps in our knowledge of the biology of these dinosaurs.”

Read more about this discovery.

U of M researchers have developed a novel virus-like particle vaccine against COVID-19. Having been successfully tested in animals, the novel vaccine offers a new approach in the global battle against COVID-19 and its emerging variants.