Soon the most violent collisions in the universe will no longer be able to hide their secrets from the prying eyes of scientists.

Thanks largely to the work of U of M student researchers, twin sets of telescopes in New Mexico and Crete (Greece), will pull back the curtain on the crucial early stages of mergers involving the densest objects known: black holes and neutron stars.

Neutron star mergers are believed to be a major source of elements heavier than iron, such as silver, gold, and platinum. Scientists are eager to learn more about how the production process works. As for iron and lighter elements, they are forged in supernova explosions.

Neutron star mergers occur on a time scale of only about 100 seconds. But telescopes powerful enough to detect light from the mergers need minutes or hours to swivel into position to observe them. In contrast, once a merger is detected anywhere, the new, ultra-fast TURBO (Total-Coverage Ultra-Fast Response to Binary-Mergers Observatory) telescopes will be able to scan the sky and position themselves in about two seconds.

“TURBO will open up a new frontier for studying objects in the sky that change in brightness,” says lead project investigator Patrick Kelly, an assistant professor in the College of Science and Engineering.

The TURBO project is funded by a $1 million National Science Foundation grant. While the research team spans universities across the country, U of M students did most of the telescope prototype building.

Both sites will have eight mounts, each with two telescopes, for a grand total of 32. The U of M team also hopes the telescopes will make them the first to catch supernova explosions in the first minute after their light bursts reach Earth. 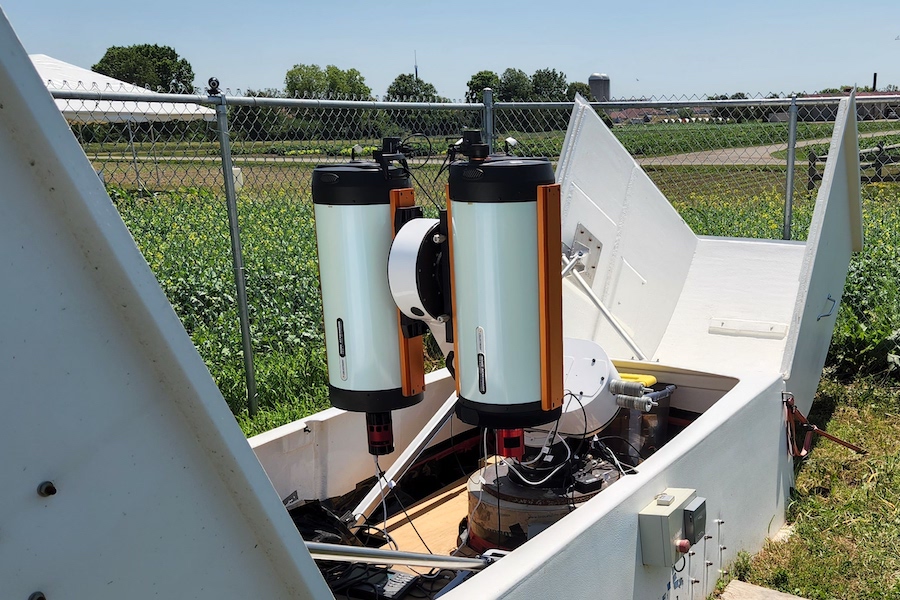 One of 16 pairs of TURBO telescopes

Computer science major Matthew Tran says TURBO “provides a really good opportunity to work with top-of-the-line hardware, get access to real-world data and be able to apply all of the theoretical things I’ve learned in classes.”

That data will include some that’s never been seen before, such as details of how neutron star mergers forge the heaviest elements.

Neutron stars are born when large stars explode as supernovas. Under these extreme conditions, atomic nuclei undergo fusion to form elements up to and as heavy as iron. They, and the outer layers of the star, are ejected into space, leaving behind a dense core.

In less than a second, the star’s core collapses under unimaginably powerful gravity. This crushes its atoms and forces the positively and negatively charged constituents of the atoms to fuse, forming neutrons. The resulting star, composed almost entirely of neutrons, is about 12 miles wide but has the mass of several suns. A teaspoon of neutron star material would weigh about 5 billion tons.

If two neutron stars merged, the immense gravitational forces would tear many neutrons free. Those neutrons would bombard, and be captured by, the nuclei of elements that had survived the core collapses. This neutron overload would destabilize the nuclei.

To restore stability, some—not all—of the extra neutrons in the nuclei would decay into protons. Since the identity of an element is defined by the number of protons in its nucleus, repeated cycles of this process would yield nuclei with more mass and, thanks to the new protons, a new identity as a heavier element like gold or platinum.

With TURBO, scientists will be able to follow this process by noting fluctuations in the spectrum of light emitted during it. These fluctuations are the signatures of the various elements that appear, disappear, and transform into other elements.

Mergers of neutron stars and black holes also generate gravitational waves (“ripples in space-time”). Their unique wave forms contain information about the distance of the mergers and the identities and sizes of the merging bodies. Future detections of these waves will be automatically communicated to the TURBO telescopes so they can turn to the appropriate areas of the sky.

Read more about TURBO from the College of Science and Engineering.

Read about the U of M’s role in the first detection of gravitational waves.