Researchers from the University of Minnesota Twin Cities College of Science and Engineering and Medical School have developed a unique head-mounted mini-microscope device that allows them to image complex brain functions of freely moving mice in real time over a period of more than 300 days.

The device, known as the mini-MScope, offers an important new tool for studying how neural activity from multiple regions of the outer part of the brain, called the cortex, contribute to behavior, cognition and perception. The groundbreaking study provides new insight into fundamental research that could improve human brain conditions such as concussions, autism, Alzheimer’s, and Parkinson’s disease, as well as better understanding the brain’s role in addiction.

The research was published today in the peer-reviewed journal Nature Methods. The study authors will also present their research at the virtual 2021 OSA Biophotonics Congress: Optics in the Life Sciences on Thursday, April 15.

In the past, scientists have studied how neural activity in specific regions of the brain’s cortex contribute to behavior, but it has been difficult to study activity from multiple cortical regions at once. For mice, even the simple task of moving a single whisker in response to a stimulus involves processing information in several cortical areas. Mice are often used to study the brain because they have many of the same brain structures and connectivity as humans.

“This device enables us to image most of the mouse’s brain during free and unrestrained behaviors, whereas previous mesoscale imaging was usually done in immobile mice using devices like the MRI or two photon microscopes” said Suhasa Kodandaramaiah, the senior author of the study and University of Minnesota Benjamin Mayhugh Assistant Professor of Mechanical Engineering in the College of Science and Engineering. “This new device allows us to understand how different areas of the brain interact during complex behaviors where multiple areas of the brain are working together simultaneously. This opens up research into understanding how connectivity changes in diseased states, traumatic brain injury or addiction.”

The new mini-MScope is a fluorescence microscope that can image an area about 10 millimeters by 12 millimeters and weighs about 3 grams. This allows holistic imaging of much of the mouse brain surface. The device is used for calcium imaging, a technique commonly used to monitor the electrical activity of the brain. The device mounted on the mouse’s head captures images at near cellular level, making it possible to study connections between regions across the cortex.

The researchers created the miniaturized microscope using LEDs for illumination, miniature lenses for focusing and a complementary metal-oxide-semiconductor (CMOS) for capturing images. It includes interlocking magnets that let it be easily affixed to structurally realistic 3D-printed transparent polymer skulls, known as See-Shells, that the researchers developed in previous studies. When implanted into mice, the See-Shells create a window through which long-term microscopy can be performed. The new microscope can capture the brain activity of mice for almost a year.

The researchers demonstrated the mini-MScope by using it to image mouse brain activity in response to a visual stimulus to the eye, a vibrational stimulus to the hindlimb and a somatosensory stimulus presented to the whisker. They also created functional connectivity maps of the brain as a mouse wearing the head-mounted microscope interacted with another mouse. They saw that intracortical connectivity increased when the mouse engaged in social behaviors with the other mouse. 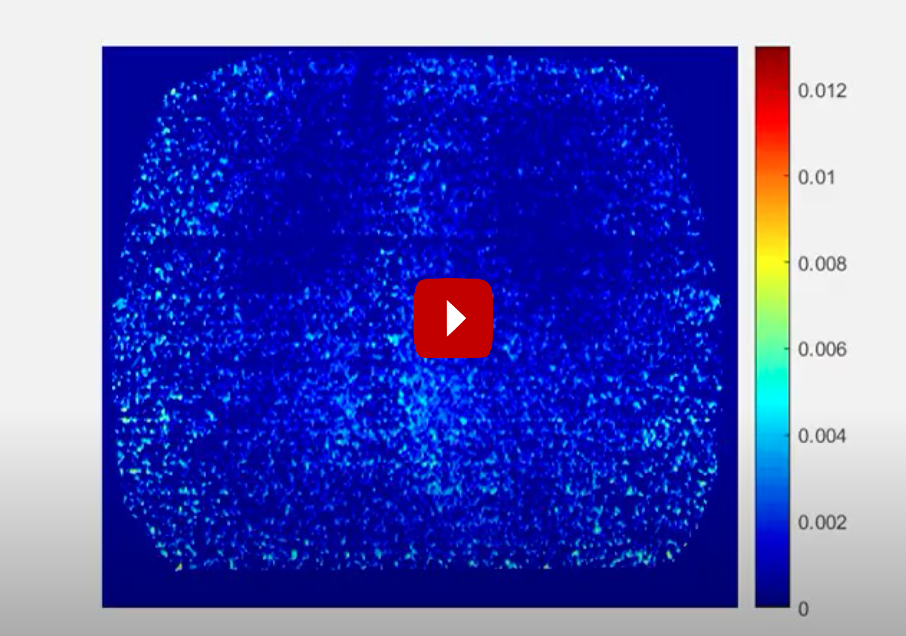 Researchers at the University of Minnesota College of Science and Engineering used a unique mini-microscope device to image complex brain activity of mice that show multiple areas of the brain interacting. This colorized imaging shows the mouse's brain activity during stimulation of the left eye. Credit: Rynes and Surinach, et al., Kodandaramaiah Lab, University of Minnesota

“Our team is creating a suite of tools that will enable us to access and interface with large parts of the cortex at high spatial and temporal resolution,” said Mathew Rynes, a University of Minnesota biomedical engineering Ph.D. candidate who co-led the study. “This study shows that the mini-MScope can be used to study functional connectivity in freely behaving mice, making it an important contribution to this toolkit,” Rynes added.

The team had to overcome several engineering challenges to create the device.

“To image the brain in freely behaving mice, the device had to be light-weight enough to be supported and carried by the mice,” said Daniel Surinach, a recent University of Minnesota mechanical engineering master’s degree graduate who also co-led the study. “Within this small range, we also needed to optimize optics, electrical and imaging hardware resolution, focusing, illumination designs to provide light to the brain for imaging, and other elements to get clear images of the mouse brain during natural and vigorous behaviors. We ended up designing and testing more than 175 unique prototypes to get the finalized device working!"

“This device allows us to study the brain in ways we could have never done before,” said Kodandaramaiah, who also holds appointments in the University of Minnesota’s Department of Biomedical Engineering and the Medical School. “For example, we can image the mouse’s brain activity as it ebbs and flows during natural movement within its space, as it goes to sleep, and when it wakes up. This provides a lot of valuable information that will help us better understand the brain to help people with disease or injury to improve their lives.”

The researchers said the next steps are to improve the resolution of the imaging and study the brain at even finer detail down to examining individual neurons.

The research was primarily funded by the National Institutes of Health (NIH) National Institute for Neurological Disorders and Stroke with additional support from the NIH Brain Initiative,  Minnesota’s Discovery, Research, and InnoVation Economy (MnDRIVE) from the State of Minnesota, Minnesota Informatics Institute’s (UMII) graduate fellowship, and the University of Minnesota’s Diversity of Views and Experiences (DOVE) fellowship.

Three law students are coordinating civic education and engagement efforts through a unique collaboration with the Minneapolis-based Legal Rights Center.

U of M alumna Kelly Holden used her expertise to help a patient overcome numerous hurdles in her COVID-19 recovery.

Gurtaran Johal credits her parents with instilling her drive for women’s rights.

As executive director of Women Moving Millions, a U of M alum is bridging the gap between funders and organizers in the fight for women’s rights.