A new study by researchers in the University of Minnesota College of Science and Engineering’s St. Anthony Falls Laboratory found that popular wakesurf boats require a greater distance from the shoreline and other boats compared to more typical recreational boats. This distance is needed to reduce the potential impact of their larger waves.

The results provide key insights into differences between specialized wakesurfing boats and more typical recreational boats operating on lakes and rivers. It also provides baseline data that can be used for future decision-making.

Wakesurfing, which requires a boat capable of generating a large surfing wave, has become a popular pastime for some Minnesotans while sparking concerns in others about shoreline erosion, water quality, and safety. However, robust scientific data on the size and impact of wakesurf boat waves has been lacking.

“Minnesotans love their lakes, and they love their boats,” said Jeff Marr, one of the lead researchers on the study and associate director of engineering and facilities at the St. Anthony Falls Lab. “Some of my best memories are of boating, waterskiing, and fishing with family and friends on lakes. This research isn't about trying to limit enjoyment of lakes for boaters, but it seeks to provide the data needed to ensure our lakes can be enjoyed by all for generations to come.”

In an effort to provide scientific data on boat-generated waves, the researchers carefully examined these waves by measuring the maximum height, total energy, and maximum power of the waves (defined as wake waves) produced by four recreational boats—two wakesurf boats and two more typical recreational boats. Using sensors and data collection hardware, the researchers also measured how the wake waves changed as they moved away from the boats and toward shore.

The researchers carried out the evaluation of the four boats in fall 2020 under a range of speeds, weight, and other conditions on Lake Independence in Maple Plain, Minnesota.

The findings reveal that wake waves produced by wakesurf boats during wakesurfing are not only higher, but they also require greater distance to decrease to the same height as wake waves from more typical recreational boats.

This study found that:

This report establishes an important baseline for the study of wake waves produced by wakesurf boats—a topic of growing interest across the country.

“We quickly learned that boat wave impacts were not just a Minnesota concern. We have received inquiries about our research from many others throughout the U.S.,” said Andy Riesgraf, another lead researcher on the project and researcher at the University’s St. Anthony Falls Lab. “We’re hoping this study will provide a pathway for shared use of our lakes and rivers.” 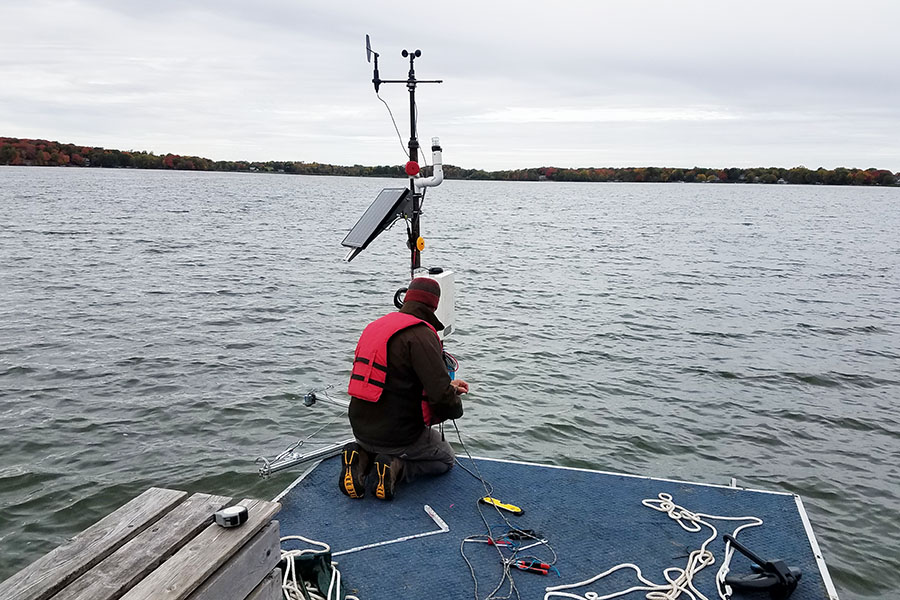 Using sensors and data collection hardware, the researchers conducted their research in fall 2020 under a range of speeds, weight, and other conditions on Lake Independence in Maple Plain, Minnesota. Photo credit: Healthy Waters Initiative, University of Minnesota

The researchers say this study gives legislators, lake associations, boat manufacturers, and property owners new information about the operation of wakesurf boats and other recreational boats on Minnesota’s lakes.

But the researchers also see it as just the beginning. This foundational work has been critical as they design further studies, with future research aimed at propeller wash interactions with lake bottoms and an examination of the impact of large waves on aquatic vegetation and shorelines.

Funding for the research was provided by more than 200 individual contributions to the St. Anthony Falls Lab’s Healthy Waters Initiative.

For more information for media:

About the St. Anthony Falls Laboratory
Established in 1938, the St. Anthony Falls Laboratory (SAFL) is an interdisciplinary fluid mechanics research lab and educational facility under the College of Science and Engineering at the University of Minnesota. The lab’s engineers and scientists collaborate across disciplines to solve fluids-related problems. The lab’s vision encompasses both science and practice, beginning with basic research and moving through application, decision-making, and management. To learn more, visit safl.umn.edu.